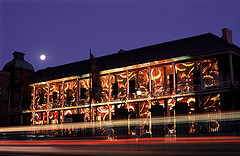 Its been 3 weeks since the NSW Sphere and the announcement of aps4nsw competition been announced by our PM Nathan Rees.
There has been some movement in the twitscopia but nothing been announced in the website.
Is this open gov? i know its a competition but you can show the people who have submitted an idea cant you?
It looks like its not picking up in the site, which is deceiving and might lead to less participation.
Even the datansw twitter and site are not giving up any information.
This hurdle is the main characteristic of the information sharing we lack from the government, just seems like this apps4nsw is missing the main point and that is dont be RailCorp!
On another note there is a cry from the people to become more active in the creation and not the discussion over the next social applications. some tweets from today

“@rbuerckner @purserj agreed. Let’s have a mix of thinking and *doing* – lots of small wins and examples needed #gov2au”

“@trib @purserj #gov2au We can think all we want, right now it’s time for doing, need to get on with it”

This is all true but there is a lack in Government participation, not You Penny you are the best, to enable us easily accessing the data, so in addition to that cry i will add use your personal contacts to move the government and make the required data available. there are people inside the parliament house that want this to happen and will gladly help you so just be pushy.

Just a bit more about the enablement of the social age in the government services and the risk that is growing out of it, reading the long article by Charles Leadbeater and Hilary Cottam about the individual making their own decision over the support of the government to disabled people using In Control‘s social platform made me think about the possibility to manipulate the system.
The way that the writers look at the personal enablement and the role of the social worker is a bit naive to my taste, the system grew to become what it is today because the clients have driven it to that not because of a conscious decision to endorse red tape and disable their employees with forms. people are looking to manipulate the system and the system is using their employees to be gatekeepers.
My thought is that we need to rethink the way we as a public gatekeep these new social platforms and let the professional do their jobs at the same time.
So let me ask for the new social gate, a tool to enable the community to stop the cheating an robbing of the system and let the money flow to the people who need it most. who is going to take the plunge and thinker the details?