You are here: Home / Archives for Experiance

This is a report of my first 24hrs with the Samsung Galaxy S2. i have moved to it from the iPhone 4 yesterday.
My first impression from its build quality was that it is a sturdy phone and a nice hardware to hold, yes apple fans nicer to hold then the iPhone 4.
It does not feel like a huge phone and you dont feel the difference until you put the phone next to the iphone.
It’s screen is nicer and brighter.
The software is less intuitive, and this is the biggest complaint i have about android OS, you have 2 panels to hold your applications and they are both kinda confusing, there is no task management that is so intuitive as the iOS double button.
i can go on but i feel its useless and was done so many times.
The phone is crisp and quick as should be expected. screen rotation and software rendering is quick and nice and it all works great.
Things that are big issues to me are the Wireless and the Bluetooth.
Wireless is just a joke. i have 3-4 bars sitting on the router, a room next i get 1-2 and less then 10m its out of reception. iphone/ipad/laptop go to the other side of the house or about 15m away no problem. sorry but this does not count as wireless. oh and i am not the only one complaining about it, got a few more in the brotherhood.
Bluetooth is also an issue, i connect it to the TRX speaker system at home and it just stops working after 5-10 minutes but does not disconnect. The issue is that it wont go out of the connection and keep playing on the internal speaker, it thinks it is connected and you need to disconnect and then reconnect. only if you leave the bluetooth zone you get the phone to disconnect and resume play on the internal speaker.
I hope that samsung will be able to change some software to solve the wireless issues or else this phone success will be trumped quickly.
As for the move from iOS to Android. i will give it a few more days and put my thoughts on this blog. 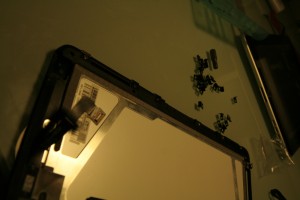 About a month ago my son managed to reach the limits of elasticity as far as the digitizer was concerned. it smashed into so many little pieces that i was glad we had the screen protector, it held them in place and left the iPad operational.

So i decided to fix the iPad on my own, as an adventure, so i hopped online to look for the parts i will need. i looked around and everybody is fixing a non broken ipad with a complete digitizer. This was not very useful as i figured out later.

I ordered a new digitizer and waited to get it in the post. it reached quickly after a few days, so i started the gruesome task of opening the iPad. since i never did it before i expected it to be simple as the people explaining the process on iFixit, it isn’t so simple. my recommendations are to start with the LHS near the top or bottom corner with 2 metal openers as the plastic ones wont handle the force of the clips. also be aware that the bottom LHS is a very delicate plastic that will squish when force is applied. my take was shatter the frame just be careful of the LCD.

Another thing i noticed when trying to get the digitizer off the plastic frame was that its not easy to remove shattered glass even when heated out of a plastic frame. so be prepared to get a new frame, its better and so i did. i was ooo so exited getting the new frame out of the box, i had an open iPad with all the parts waiting to be assembled and i even bought a set of clips to put to the frame as the ones that were on the old frame just bent and broke. alas the screws are too small for the holes the frame has, something was missing.

After a short look around the internet i found 2 things that are important for the final assembly, screw nuts that go in the frame and the adhesive that holds the digitizer to it. order that and wait a week to get it.

Yesterday it all came to be, all the parts are ready and i am about to put it together with my son, and i realize the nuts are not fitting they are very hard to press in. i decided the brutal way is just what the doctor ordered and took a hammer and an elan bit to push the nuts in, it was the right way.

From that moment onwards it was just an assembly game screw the LCD then the clips and then put the adhesive in the right order stick it all up and you got the screen assembly done. the next phase is to put it all together and here comes iPad back to life.

After a month of lacking the iPads presence i have it back. it is such a nice feeling.

So what is are my lessons?

The biggest is don’t mess with apple, the way everything is tightly positioned into the packaging and the way it is assembled is to prevent you from dealing with the internals of the thing seems to be well thought out. though it is much better then an iPhone 4 situation it is still not the easiest thing to open and close.

If you are going to fix it yourself either buy all the items in one go, list below, or but a fully assembled digitizer and frame with the clips and all as it is available these days from some places.

I hope you will have a quicker and easier fixing experience then i did after reading this.

You need a sweet after taste.
Thats it, i am done.
But wait this is not twitter here man. give us some more you say.
Let me tell you a story about a store named Five Senses Coffee, they got some loud noises from a displeased customer over the twitter space lately, but they have opted the game.
My Guatemalan coffee beans stock dwindled and I needed a fresh batch. so i ordered the beans somewhere pre noon on a thursday and went along with my day.
The next morning to my surprise a courier with the bag buzzed the door, it was 8:15 am.
This surprise was so welcomed and left a great after taste over the purchase.
This is a great lesson to every business and especially a startup, if you can leap over the competition and give your customers some nice after taste when they expect the normal business routine do it! you will get much more customers at this point.
The competition of the coffee bean market is huge but making me rave about it without paying me is what you want.
To a web startup you need a product that will make your clients think “How nice and easy was that?” make them go the extra mile and rave about you.
They need to think what a great service.
I have just seen how its not done. when i was in the market for an online backup i was testing Carbonite to see how good are they and also used iDrive.
When i had issues with the speed with Carbonite i turned to the Customer support with a question as of why it is happening. to my surprise the tech response was so out of focus and blaming, it gave me a feeling of “why the hell did i bother?” and “better pack your bags and go!”,
But Carbonite CEO has his email in contact us page so i decided to give it a go and sent him an email with the trail of the email, surprise surprise, i got a better rep.
But all they did was to give me extra time to try.
Man that bitter taste is still lingering. will i recommend Carbonite?
No.
So what can we do when the product sucks and we have users who are complaining? how do we make them feel good and leave with sweet after taste?
This is your golden question, just don’t ignore these users and don’t over compensate them, let them feel the sweet after taste of a good deal.

Working on the Omm Writer, is it that productive? it seems to disable all of the interface and allow you to look only at the written word.
At first i did not believe how this could influence my work.
But this trial got me to believe that my work can improve!
Seen the words hand from the emptiness on a screen lets you concentrate on the words.
The twitch sound while you type makes you want to type faster. and the ability to remove words with no punishments using the backspace really makes the process, well, joyfull.
I am experiancing sensation of happiness and joy. some thing not related to writing usually.
The interface is easy to use and simple.
Saving the file as text gives it vast availability.
May be i should try writing code here.

This is a thought. why not make our development environment like this… why not actually?
why?

So our bosses wont be chasing us with questions over our actions on the screen? no they will learn to understand and will be avid users after they try it.
Happy did i mention? in a calm way…

Try OmmWriter, its free.
p.s. Dont change the typing sound to No. 2. just because yuva.equals(“happy”) = false.

First and fore most i want to thank the organizers and the participants for an inspiring and motivating day.
I have arrived late to the event and only was through the second half of the day but got very good presenters and some interesting people who have put their heart and information out for the others to comment and help out.
The day was great and i dont want to restate the info already typed here, and if you were in the Startup BarCamp you are welcomed to put your notes up the wki page.
What i want to reffer to was my suggestion to the next Startup BarCamp.
The question asked was what do you want to have in the next Startup BarCamp, a predefined agenda or in the tradition of BarCamps a fluid on the spot agenda.
My suggestion was to make it a semi fluid agenda holding spots for subjects and letting presenters present in a fluid manner inside the time slots i.e.

This will give the people a more coherent way of knowing what to attend and when to wake up.
But i am now thinking that bar camp with all the intensity and fluidity needs to stay fully fluid.
The best example was the Pitch Your Idea session that took more time then most of the presos and was helpful to every one in the room.
So what is your take on this?
[poll id=”2″]