You are here: Home / Content Management / The iPad web influence. 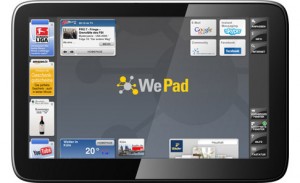 No no no, i did not get an iPad on ebay, its still missing some basic specs i need like a camera, though the WePad seems more like what i want.
The iPad is starting to symbolize the death of the Searched web, where website page was king, this is done with the help of mobile OS’s perception of usability standards.
iPad is pointing on the change we are making to the internet, from the even spread internet to Silos of information instead with vertical content, the Apps!
There are some people in the industry that compare the iPad with the CD-ROM publishing phenomena, where CDs were sellotaped to the front of a magazine, and their inability to bring extra profit. they were only done to glorify the news paper brand.
Apps are wonderful things they are focused on a single realm of usage and the put the rest of the world aside, but they are changing the way we build our internet and structuring our content.
We used to have silos of thought and very productized information consumption long ago when the internet was nothing more then a dream in some university, they called it news paper.
But the internet broke these silos to pieces and enabled a generation of people to produce news and information sharing in the forms of Blogs, Micro blogging and Collaboration Sites.
These enabled us to publish everything and surpass governments to display real footage from places like Iran.

But the iPad is becoming the icon of the reversal of that, its iconic because of the broken promise of creating the ultimate publishers tool.

What we get is a big App driven solution resembling the iPhone and Android phones supplying segregated content streams that are awesome on the go but lack when you hit a certain size and commitment.
The phenomena we are getting now is that many companies invest efforts in becoming iPad capable with applications, especially publishing houses, which in this age of the web should not happen. The web standards should have sufficed with a browser.
Some will claim that the Appcelerator IDE and alike just create a web interface over the same content i supply, i disagree as to the point that web standards should have driven the product to be able to display and let a person interact with content without the need to re mask it under an app.

The issues i see with this from the content management side are huge, since we are now using a different interface to display content you will not be getting the same content as it is probably not looking “Good” on the App you just built, this will mandate an “iPad” version of the same content and thus will create content duplication and degradation to fix display issues that could have been avoided.
We are talking about multiple content formats to maintain partially duplicated content with same metadata and probably the same tags and classification, all in the sake of the App.
This will create the duplication of resources in the team to manage the Website and the App’s, iPhone/iPad/Android etc, content.
I wonder how quick will somebody build a publishing plugins/system only for iPhone/iPad and the likes?

But i think that the product is incomplete as with the iPhone that was released in the first version without the GPS who its competitors had.
So i am not claiming i will never buy an iPad, just not this one.

As for some other perspective i got thinking about when i was reading Jeff Jarvis article, the inability to open the packaging, with the ability to close it back, makes these items throwaway like and very unfriendly to people who can repair electronics or inquisitive child.
This is something i can understand in a phone a bit more, may be as a construction stability, but not at a personal computing unit.